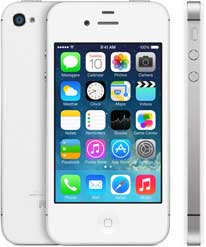 Fingerprint-resistant oleophobic coating on front and back

Support for display of multiple languages and characters simultaneously

Charging via USB to computer system or power adapter

Video playback: Up to 10 hours

Audio playback: Up to 40 hours

Apple ID (required for some features)

Syncing with iTunes on a Mac or PC requires:

iPhone and the Environment

Apple and the Environment

Use this ultracompact USB-based adapter to charge your iPhone whenever it’s not connected to a computer.

Made of durable rubber and molded plastic, the two-tone iPhone Bumper fits snugly around the edges of iPhone 4S and iPhone 4. And adds a splash of color.

Actual size and weight vary by configuration and manufacturing process.

CDMA available only if iPhone 4S is sold and activated for use on a CDMA network.

All battery claims depend on network configuration and many other factors; actual results will vary. Battery has limited recharge cycles and may eventually need to be replaced by Apple service provider. Battery life and charge cycles vary by use and settings. See www.apple.com/batteries and www.apple.com/iphone/battery for more information.

Some features, applications, and services are not available in all areas. See your carrier for details. Application availability and pricing are subject to change.